16 Hands is a semi-annual studio tour in Floyd, Virginia. As a 16 Hands founding artist, Silvie hosts an artist in her studio during each tour. Below you’ll find information on the different guest artists that Silvie has hosted over the years. 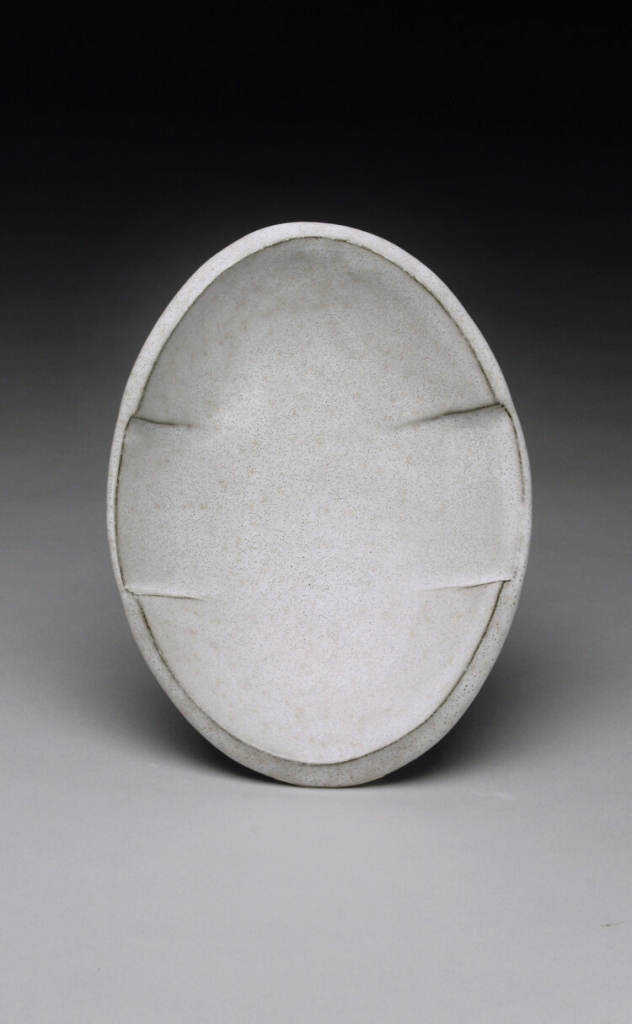 Jerilyn VirdenSpring 2021 Guest Artist
Using the vernacular of the vessel, I use earthenware clay to create utilitarian and sculptural pieces. While the sculptural and utilitarian objects come from different inspirations, they are united by formal aspects and considerations, inhabiting the same space and enriching it equally. Looking to seemingly unrelated objects that have a contemporary relevance, I pare down forms and exaggerate proportions accentuating their sense of generosity and strength. Functional work and double walled bowls are formed through repeated pinching and scraping, building up and finally excavating the appropriate curve, each piece retaining the history of its making. Layers of glaze soften these individual marks, bringing more clarity to the form. Hollow construction allows for exaggeration of features, contributing a visual weight that floats above the table. The surface becomes a way to manipulate scale, moving from intimacy to expansion, in the way one understands a landscape by knowing both the small stone at one’s feet and the bulk of the mountain far away. Emilio SantiniFall 2019 Guest Artist
My main occupation for the past 35 years of my life, is creating object in glass for functional and decorative purposes and art objects.I do not look for inspiration anywhere, but I let my soul to be touched by an object, a phrase, a landscape, a mood, the smile of a person, or the drop of rain; and in translating those feeling into an object, I define the meaning of life, which can be read in them and through them. Suzie RossSpring 2019 Guest Artist
I am drawn to photographs, a still image in a moment in time. My goal as an artist is to make an image that connects my soul to the world I live in. In turn, my hope is that these images empower those who see them to connect their stories, their heart, to the world they see in my pictures. I want to leave room in my work for the imagination of the viewer to roam. It’s a goal. Sometimes I just make a pretty picture, or one to document my week, but sometimes I make an image that makes my spirits soar. My favorite muse is the small pond on our property, for me it gives new meaning to looking beneath the surface. I am never visiting the same place twice. Dennis RossSpring 2019 Guest Artist
Wood turning is a craft using a natural material to fulfill a basic need for a bowl. Bowls contain our food and our things. Wooden bowls enliven an interior space, reminding us of our organic nature. Turning bowls from native trees found on my 50 acre farm in the mountains of Virginia satisfies my desire to make useful things that are also decorative. I use trees and limbs that are fallen from storm or disease. The decoration on my bowls comes from the beauty of the wood itself I seek out wood that has been stressed by living; twisted limbs and wood infested by beetles or fungus. The tree reacts to these stresses by producing extraordinary grain and color. I sometimes fill large defects with copper or stone dust to stabilize the bowl. My bowls are meant to be handled and used, bringing some of the outdoors inside. Agnes SeebassSpring 2018 Guest Artist
Agnes creates metal jewelry, primarily silver, with designs influenced by both German and Mexican culture. She is inspired by the forms and contrasts found in the Mexican environment in combination with her love of simple geometric shapes and precise craftsmanship. Agnes will be my guest in the upcoming Spring Studio Tour.
VISIT AGNES’S SITE 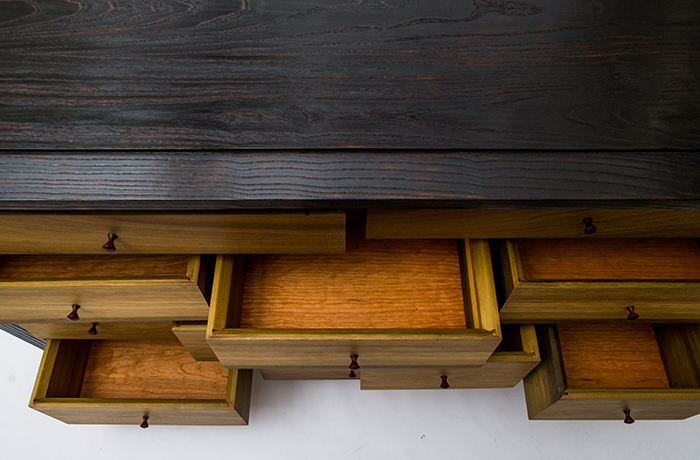 Benjie OsborneGuest Artist
Benjie appreciates joinery, color and detail in his furniture. Dovetails, mortise and tenons and lock miters act both as strong joints and carefully considered features. Benjie seeks out those unique pieces of wood that nature has dyed in unexpected ways. He carefully selects bright red Paduk, high contrast light yellow and rich black and purple poplar, red orange cherry and deep purple walnut. Rest assured that each bevel, each proportion, each angle, and each material has been overthought and he has enjoyed every step of the process, except the pricing.
Visit Benjie’s Site Susan IcoveGuest Artist
Susan creates three-dimensional collages to form the body of each lamp or candlestick. Ordinary household objects reappear in surprising, delightful, and sometimes hilarious ways. Each lamp has a theme, and every component is significant. Susan may try thousands of different combinations of components, taking parts on and off repeatedly, before she finds the arrangement that works.
VISIT SUSAN’S SITE Gail KendallGuest Artist
“My ceramic works are influenced by European earthenware pottery and porcelain traditions from the 13th through the 18th centuries. Both “peasant” and “palace” pots inspire me. In the former it is the casual, perhaps careless result that excites me: the drip of glaze, the impurities in the clay, the globs of kiln-shelf refuse fused to the bottom. These imperfections often enliven the pot in ways that take my breath away. In the latter, the elaborate rendering of form and surface common to porcelain factories such as Sevres and Spode, fuels my imagination.”
VISIT GAIL’S SITE Ed BarnesGuest Artist
This Blue Ridge Mountain wood turner starts with woods native to southeastern Virginia and inlays the most exotic woods of the world. He looks for stumps, burls, or gnarled trees that have been influenced by the passage of time. His specific vision is in the design; ancient forms with a modern twist. Mother nature brings her part, the beauty of the wood figure. Ed Barnes’s part is to use the vessel as a canvas to inlay designs and introduce elements that nature never intended. Then there are the gray areas that make the viewer wonder whose hand is responsible: nature’s or the artist’s. Ed and his wife live close by in Woolwine, Virginia.
VISIT ED’S PAGE 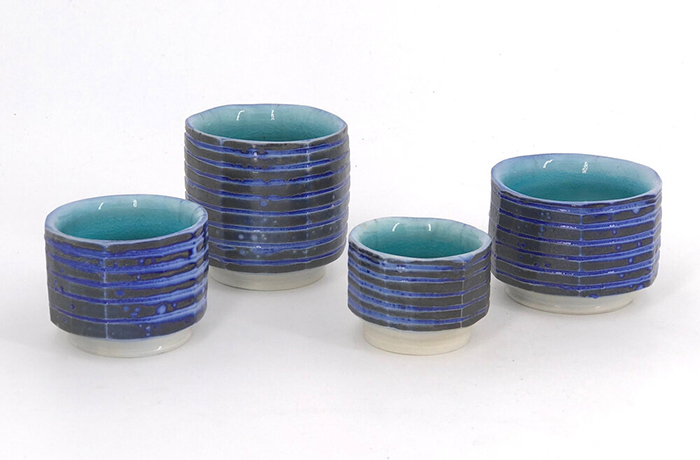 Mark ShapiroGuest Artist
As my work has evolved I continue to be compelled by the challenges of domestic pottery, but I have also recently become interested as in making larger scale work that is more appropriate to the scale and abstractness gallery space than the kitchen.
VISIT MARK’S SITE Jon Ellenbogen + Rebecca PlummerGuest Artist
We make functional pottery intended for daily use in your home because we think such objects give special meaning to everyday life. When we reach for a handmade coffee mug each morning, we always ask ourselves, “who do I want to have breakfast with today?” Our own pottery collection represents a personal relationship with each and every one of its makers, and we hope our work will do the same for you.

Working as potters have done for hundreds of years may seem anachronistic, but we feel it places us into a timeless historical continuum that has never lost its meaning. We are inspired both by the historical pottery of other civilizations and by the creative work of our contemporaries, and we strive to place our work squarely within that broad context. Even after nearly forty years as studio potters we still awaken each morning eager to see what will happen in the studio today. Chris GryderGuest Artist
There is a subtle architectonic logic which pervades the artwork I make. I think of this aesthetic as a sort of “organic tectonic”; a construction involving a language of natural forms, an assemblage of patterns associated with systems of phenomena which make up the natural world.

Inspired by the life sciences, including the fossilized record and the amazing worlds opened up by electron microscopy, I create a world where botanical and geological forms seep into an organic/geometric matrix. “Earth forming,” my novel process of making is a technique which involves carving intricate one-off molds out of sand and clay. These fragile earthen “form works” last only long enough to capture my clay creations (containers, vessels and relief tiles), until they can be excavated and eventually fired. Nick JoerlingGuest Artist
I make pots as much from a drawing sensibility as a pottery one. Daydreaming with a pencil. Not drawing as rendering but simply doodling; quick gestural pencil strokes, then working to turn those pencil marks into a useful pot. Profile is a strong attraction, a strong dictate, and of course that sense of animation. My pot reference is most often you and I, our bodies. It’s where my cues come from: dance, people seated on a park bench, the cleavage that forms on the inside of a bent elbow. But I want to stay in the pot’s world — if the reference is too literal the pots seem deflated. Lately hollow rims are turning up in a lot of pots, and a trip out west has dropped hoodoos into the mix. In my studio what I hope for are pots that have qualities of sensuality, compassion, humor, and risk.
VISIT NICK’S SITE 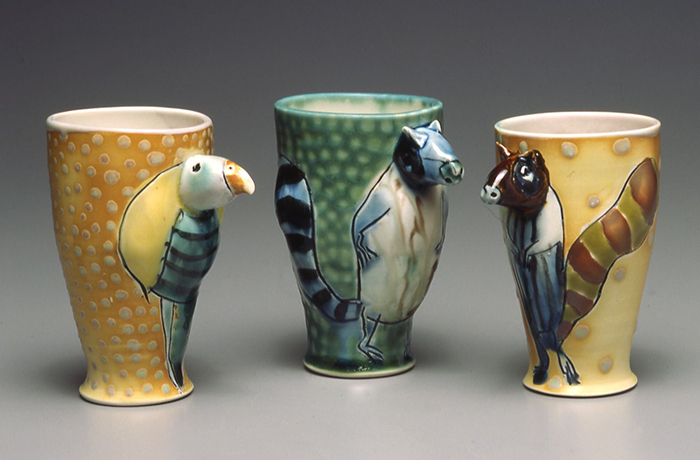 Bernadette CurranGuest Artist
Bernadette Curran is a studio potter in Ardmore, Pennsylvania. She teaches clay and drawing in her community and conducts workshops, most recently at the Archie Bray Foundation and Haystack. She was awarded fellowships from Baltimore Clayworks, Chester Springs Studio, and the Moravian Pottery and Tile Works. Bernadette earned a BFA from Pennsylvania State University and an MFA from the Ohio State University. Her work is exhibited widely in the US.
VISIT BERNADETTE’S SITE

Pietro MaddalenaGuest Artist
Pietro Maddalena studied ceramics at the West Surrey College of Art & Design in England. After several years of training, he returned to Italy where in 1980 he established a pottery workshop on Tuscany. In addition to his own ceramic production, he continues to build, teach and direct at the International School for Ceramics La Meridiana.
VISIT PIETRO’S PAGE

Linda McFarlingGuest Artist
“I live and work in the beautiful mountains of western NC. My aim as a functional potter is to make pots that honor the rich traditions of the past, while hopefully adding to them. My pottery is wheel thrown, textured and altered directly on the wheel in an attempt to create strong, quiet, lively organic forms. The textures I use are drawn from natural objects and the landscape around me. I aspire to integrate those forms and textures found in nature with the unpredictability of the firing. I fire in an atmospheric kiln using salt and soda which allows me to influence the work during the firing which directly influences the final outcome.”
VISIT LINDA’S SITE Marc MaioranaGuest Artist
Marc learned blacksmithing from his father and earned a BFA in Metalsmithing from Southern Illinois University at Carbondale. He was a resident artist at the Penland School of Crafts and has taught at numerous institutions. Recently Marc’s ironwork was featured on the DIY Network TV Show: Man Caves, and will be exhibited and permanently acquired by the Smithsonian American Art Museum’s Renwick Gallery
VISIT MARC’S SITE